Covid Ireland: economy explodes amid pandemic with 3.4% growth in 2020 thanks to exports

Ireland’s economy exploded in 2020 despite the coronavirus pandemic, with the country growing thanks to increased pharmaceutical and IT exports.

The country has fared better than the major eurozone economies Germany and France, which plunged into recessions last year as Covid shut down the global economy.

Donohoe called the GDP growth “remarkable”, adding that it “is entirely the result of export growth” which has been spurred by the pandemic.

Despite a slowdown in global demand, Irish exports rose 6.25% last year, according to figures from the country’s finance ministry.

“The pharmaceutical and ICT (information and communication technology) sectors have recorded extraordinary growth in exports, driven by successful immunological drugs, Covid-related products and the shift to work from home”, Donohoe said.

Modified domestic demand – a figure that excludes the effects of multinationals – registered a drop of 5.4% in 2020.

Donohoe said it was “a number much closer to the typical fall in advanced economies.”

The Irish Department of Finance said there had been a “two-tiered impact of the pandemic” on the economy, with multinational companies generating the highest level of exports on record.

Meanwhile, domestic activities “pay the biggest price” and “indigenous exports” of food and drink have collapsed, according to Donohoe. 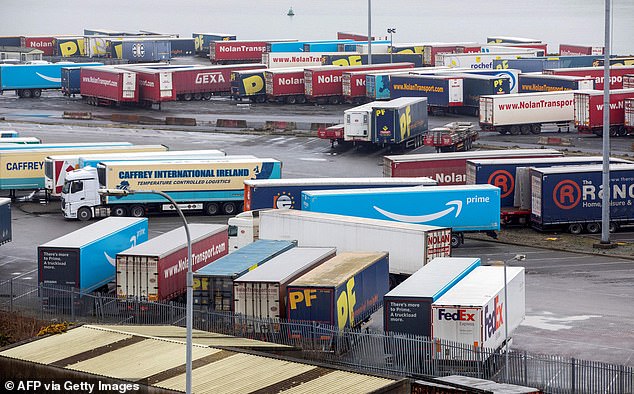 Despite a slowdown in global demand, Irish exports rose 6.25% last year, according to figures from the country’s finance ministry. Pictured: Freight and heavy-duty trucks, including Amazon branded ones, are pictured at the quayside at Rosslare Harbor in Rosslare, south-eastern Ireland in January 2021

He pledged that the government “will continue to cushion, to the extent possible, the contraction in private sector demand” before attempting “to balance the books”.

The minister said more than a million people in Ireland were receiving state income support because “the labor market has been turned upside down”.

In a speech, Donohoe said job losses had been concentrated in the public sectors with the highest unemployment levels among young workers.

Ireland has unveiled a 2021 budget package with additional spending of more than € 17.75 billion, as the nation also faces the fallout from Brexit.

Ireland has suffered 4,396 deaths from the coronavirus, according to the latest official figures, and its third lockdown is expected to last at least until next month.

After sailing through two previous waves of the pandemic with low case and death figures, the virus surged earlier in the year.

In early January, the country had the highest per capita infection rate in the world, according to data from the University of Oxford. 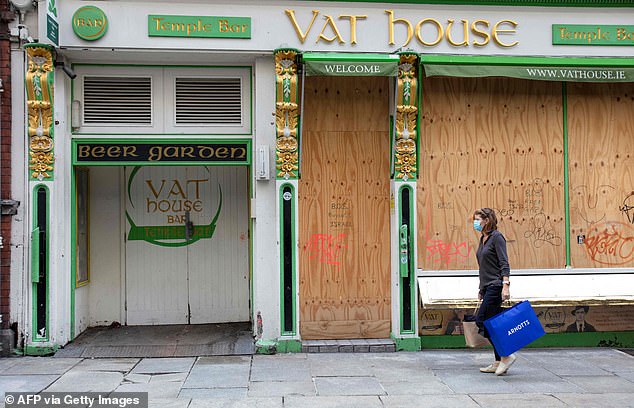 But Ireland’s multinational export sector is distorting the nation’s overall GDP figure – home to five million people. Altered domestic demand – a figure that excludes the effects of multinationals – fell 5.4% in 2020. Pictured: A woman walks past a barricaded barricade in Dublin amid the coronavirus pandemic

Ireland has said it will administer some 84,000 Covid-19 vaccines next week, which is below its weekly target due to ongoing supply issues.

The health department struggled to speed up the vaccine rollout after maker AstraZeneca said it would miss 75,000 doses of the vaccine over two weeks.

The company told HSE bosses that supplies would be completed by the end of the month.

The government has said 100,000 vaccines will be delivered each week, but those numbers have been revised down to around 82,000 per week.

HSE clinical director Colm Henry said the vast majority of people over 85 will be vaccinated by Sunday.

Gordon Lyons: A Northern Irish economy that benefits everyone

• Chart: The market for counterfeit goods is worth more than the Irish economy